Initiating ESI RP Programming with a Keypad or Remote

ESI’s motor controllers and RQ-embedded motors fully support their RP family of input devices. This includes keypads, remote controls, sun/wind inputs, contact-closure switch interfaces, RS-232 via the R2D7, and more. To program the RP options of the controllers or motors, you will need to use a 24-channel keypad or remote control. This article will walk you through initiating programming. We will provide a programming example in a separate article.

To initiate RP programming, you will need to perform what’s known as a stop-seven-seven (noted as S+7+7 in ESI’s documentation). This means that you press and hold STOP and then press open 7 and close 7 simultaneously while holding STOP and then release. The LED in the upper left of the keypad/remote will begin blinking. 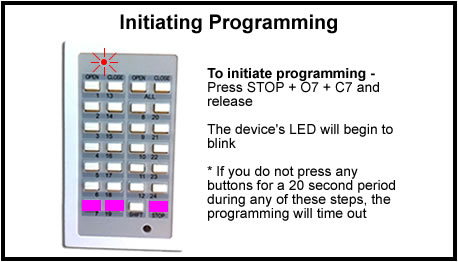 You should now understand what S+7+7 means and be able to start programming the RP options on your controllers and/or motors. If the LED doesn’t begin blinking, or if the LED times out, simply reattempt the S+7+7.