*** NOTE: The controller needs to be calibrated and it must also have the first group channel set. Click here for the calibration steps and here for instructions to set the group channel. ***

To begin, open the RP Programming Summary and find the table entry labeled “Enable Int. Positions A & B on 1st Group Channel” Then simply follow the steps in order from left to right. 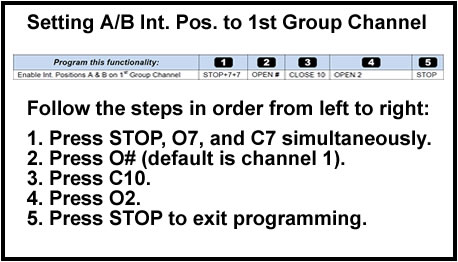 For example, if I was setting intermediate positions A/B to the first Group channel on the controller whose main address is channel 9, I would follow these steps:

At this point, the first group channel Open command will move the motor to 20%. The next steps will allow us to change this percentage.

To change the intermediate position values, refer to the RP Programming Summary and find the table entries labeled “Set to position 100x+10y+z percent away from reference” under the Intermediate Position A section. Then simply follow the steps in order from left to right. Use Open 10 during the 4th step for a zero value. 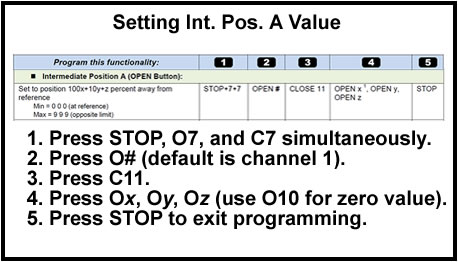 ** If different intermediate positions are desired, change the values entered in steps 4 and 6 above.

There are similar steps to setting the value for Intermediate position B in the ESI RP Programming Summary.

The controller will now move the motor to intermediate positions of 99% on an Open command on its first group channel. To confirm, press Open for the group channel to verify that the treatment now moves to this position.