Z-Wave is one of the most popular solutions for home automation. Likewise, RTS (Radio Technology Somfy) is Somfy’s most popular control option for their motorization products. There’s a simple-to-use Z-Wave to RTS Interface (ZRTSI 2) which can be used to marry the two technologies together to provide you with window treatment control from your Z-Wave gateway. The Somfy ZRTSI 2 allows you to control up to 16 RTS channels and each RTS channel can control a single treatment or a group of treatments. Because it plus into an outlet, the ZRTSI acts as a line-powered, routing device within your Z-Wave network.

*** NOTE: This article is written with the assumption that there is an existing RTS-controlled treatment or treatments which are already set-up and operating from a Somfy remote control. It also assumes that there is a compatible Z-Wave gateway controller. *** 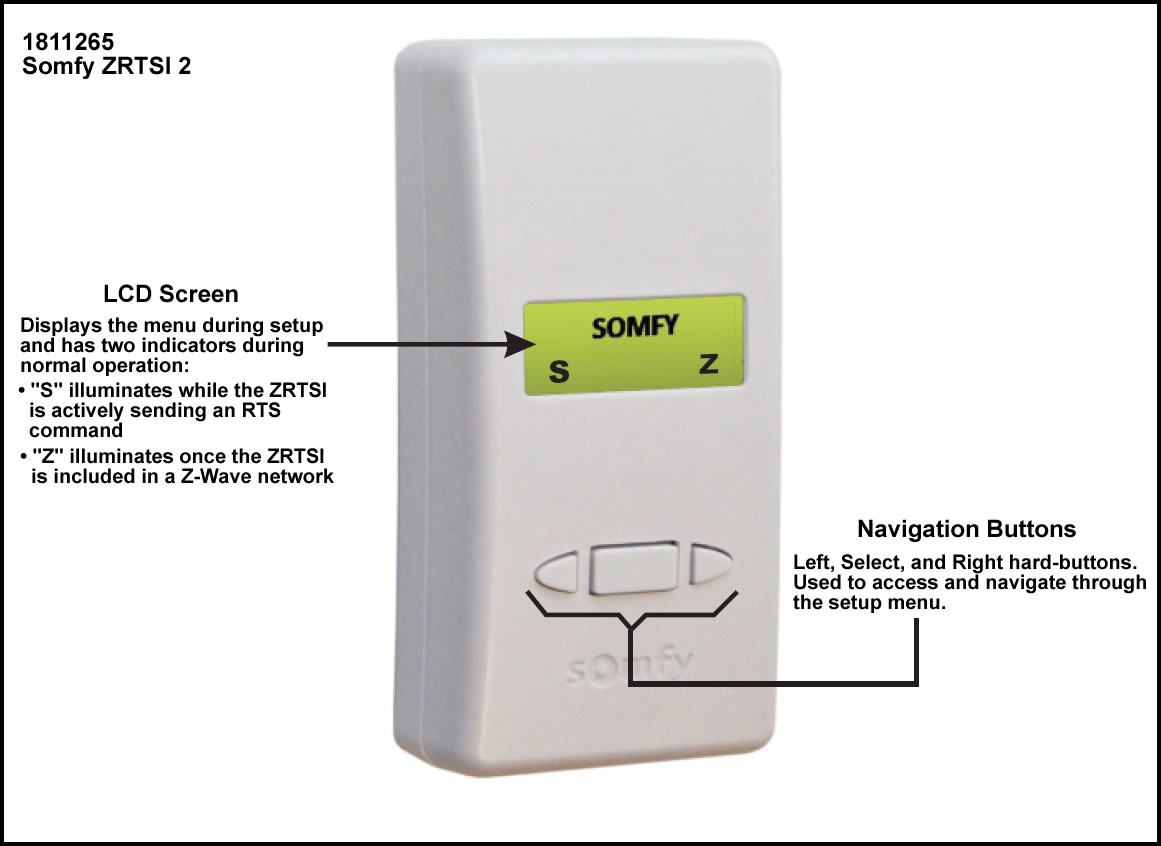 First, you will need to include the ZRTSI to your Z-Wave network.

NOTE: If the “Z” system indicator is present, the ZRTSI has previously been configured. You will need to restore the ZRTSI to factory default before it can be included into your Z-Wave network. See the instructions at the end of the Procedure section.

NOTE: If “BASE INCLUDE FAIL” appears, retry inclusion following steps 2 through 4. If that is unsuccessful, restore the ZRTSI to factory default by following the steps at the end of the Procedure section.

Once the ZRTSI is included in your Z-Wave network the “Z” indicator will appear in the lower-right of the ZRTSI’s LCD screen during normal operation and the Base Node Include option will disappear from the Base Node Sub Menu.

Next, you will need to add “virtual nodes” to your Z-Wave network. The virtual node numbers, 1-16, on the ZRTSI correspond directly to the RTS channel outputs on the device.

NOTE: If “Vxx INCLUDE FAIL” appears, retry inclusion following steps 1 through 3. If inclusion is still unsuccessful, move the ZRTSI closer to the Primary Z-Wave Controller.

Restoring the ZRTSI to Factory Default

Your Somfy RTS treatments can now be controlled by your Z-Wave gateway.