All electronics have a limited lifespan, so at some point you will need to replace them. There is good news - ESI’s newest motor controllers still fully support their RP family of input devices. This includes existing keypads, remote controls, sun/wind inputs, contact-closure switch interfaces, RS-232 via the R2D7, and more. This article will walk you through the components you will need to replace an ESI RP12AU, RP24AU, RP60AU, or RQ60AU controller. Programming the replacement unit is explained in separate articles.

Additional hardware which may be required:

Confirm that you are replacing the correct type of controller. Each control board has at least one sticker located on the top of the board which shows the controller’s part number. The part number should begin with either an “RP” or “RQ” and have an “AU” later on in the part number.* 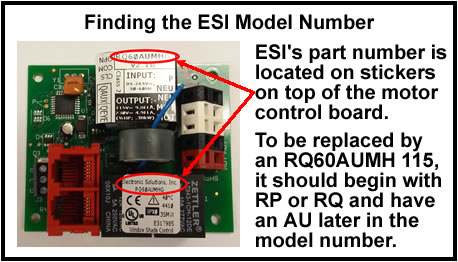 * NOTE: Even though it fits these criteria, the RP60AUH DRY cannot be replaced by an RQ60AUMH 115. You would instead replace it with another RP60AUH DRY.

If the board you are replacing is part of an existing system, it will likely need to be programmed to operate on the same channel as the board which is being replaced. If you don’t have a 12- or 24-channel keypad or remote control, you will need one to change the channel from its default (channel 1). Additionally, if the original controller operated as part of a group, you will need to program group channels into the new controller. Please refer to our articles “ESI RP Programming Example - Changing the Main Address” and “ESI RP Programming Example - Setting Group Channels” for step-by-step instructions.

There is another thing to note, the newest generation of ESI’s AC motor control boards are .23” wider than the older boards. If you are replacing a controller which uses stand-offs, you will need to either move two of the stand-offs or remove them entirely and add a piece of Snap Track to insulate the back of the board.

You should now have a better idea of what controllers can be replaced by an ESI RQ60AUMH 115 as well as which additional components you may need to program the replacement.