ESI’s motor controllers and RQ-embedded motors fully support their RP family of input devices. This includes keypads, remote controls, sun/wind inputs, contact-closure switch interfaces, RS-232 via the R2D7, and more. To program the RP options of the controllers or motors, you will need to use a 24-channel keypad or remote control. This article will walk you through one of the most common RP programming steps, setting group channels. The layout of the keypad/remote control and initiating programming are explained in separate articles.

All ESI controllers have a main channel, which is used to address a controller for programming. Each controller also has the option to respond to commands from up to six group channels. If you are replacing an ESI controller in an existing system, best practice is to set-up the group channels of the replacement controller to match the address that the older controller operated on. This is also useful to create an “all open/close” channel if you have a keypad or remote without an All Open or All Close button already (such as a K6ST).

To begin, open the RP Programming Summary and find the table entry labeled “Set 1st Group Channel to N.” Then simply follow the steps in order from left to right. 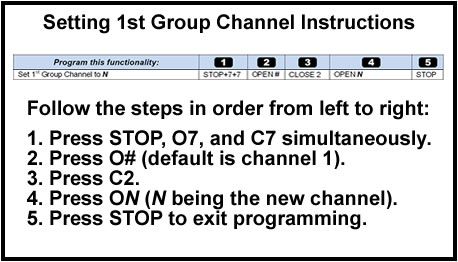 For example, if I was setting the first Group channel to 12 on the controller whose main address is channel 9, I would follow these steps:

I would then repeat these steps as needed to set additional controllers’ 1st group channels to 12.

The first group channel of the controller is now set. To confirm, press Open or Close for the group channel to verify that the treatment now operates on the new channel.